The Apostle Paul told the Thessalonians to be on the lookout for “a letter seeming to be from us” (2 Thess. 2:2). After the death of the apostles, many books began circulating that claimed to be written by the New Testament authors. Many of these books can be read today.

The New Testament that Protestants use contains 27 books. The “canon” (Greek for “standard”) of Scripture deals with how these books made it into the New Testament and why others didn’t. Christians are often confused about this issue and what the process looked like in the early church.

The first church historian in Christianity was a man named Eusebius. He compiled his work, Church History, between AD 320-330. In this book, he surveyed the church of the previous 3 centuries and divided the books into 3 different categories: Accepted, Disputed and Spurious.

In Book Three of Church History, he has a chapter called “The Divine Scriptures That Are Accepted and Those That Are Not.” Here is what he says about the Accepted books:

“At this point it seems appropriate to summarize the writings of the New Testament which have already been mentioned. In the first place must be put the holy quaternion of the Gospels, which are followed by the book of the Acts of the Apostles.

After this must be reckoned the Epistles of Paul; next in order the extant former Epistle of John, and likewise the Epistle of Peter must be recognized. After these must be put, if it really seems right, the Apocalypse of John, concerning which we shall give the different opinions at the proper time. These, then, [are to be placed] among the recognized books.”

He affirms 22 of the books to be canonical, including the four Gospels, Acts, 14 letters of Paul (including Hebrews), 1 John, 1 Peter and Revelation (although he also placed Revelation in the spurious category because some believed it to be so).

Here is what Eusebius says about the disputed books:

“Of the disputed books, which are nevertheless familiar to the majority, there are extant the Epistle of James, as it is called; and that of Jude; and the second Epistle of Peter; and those that are called the Second and Third of John, whether they belong to the evangelist or to another of the same name.”

According to Eusebius, the five books that were widely accepted by most but disputed by some were James, 2 Peter, 2 John, 3 John and Jude.

Eusebius then mentions some books that were considered to be spurious by the church. Here is a helpful chart that summarizes his three categories: 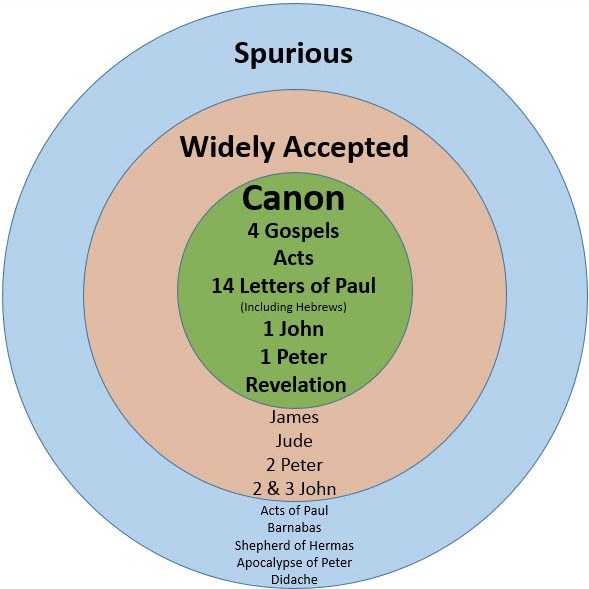 The Formation of the  New Testament Canon

I think Eusebius’ list show us two things about the formation of the New Testament canon.

Second, this tells us that the debate only focused on a few books (6 including Revelation). Even though these books were widely accepted in the church, it took some time for them to become canonical because of those who disputed them.

Check out my post on A Clear Lens for a more in-depth article on the New Testament Canon.

What are your thoughts on the process of the New Testament canon? Let me know in the comments!